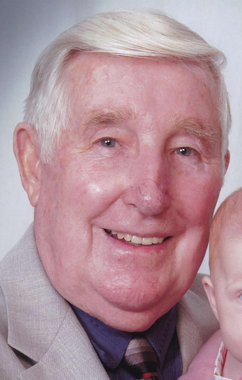 Back to Bobby's story

Bobby "Robert" Jean Morris, 89, Kokomo, passed away Feb. 6, 2019. He was born June 22, 1929, in Tipton, Indiana, to Orrien and DeLee (Freeland) Morris.
In 1949 Robert married Peggy (Aaron) Morris, and they were together until her passing in 2004. Robert was an Army veteran and served in Korea. In 1959 he joined the Kokomo Fire Department, where he rose to the rank of battalion chief, retiring in late 1985. Robert was also a proud member of the Masons, Scottish Rite and Shriners. He enjoyed building things; he was the eternal "fixer-upper," completely remodeling their home in Florida. Most of all, Robert enjoyed spending time with his family, cheering on his grandkids at their swim meets and other activities.
Robert is survived by his sisters, Peggy (Max) Heflin and Sue (Charles) Cardwell; daughter, Bobbi (John) Hillis; grandchildren, Alison (Andrew) Jackson and John Robert Hillis; great-grandchildren, Annie and Alivia Jackson; and many special nieces and nephews.
In addition to his parents and wife, Robert was preceded in death by brothers, Orrien Jr., Raymond, Billy and Teddy Morris, and sisters, Alice Vair, Edith Plake, and his twin, Betty Morris.
Family will receive friends from 2 to 6 p.m. Sunday, Feb. 10 at Sunset Memory Garden Funeral Home, 2097 W. Alto Road, Kokomo, IN 46902. Funeral service will be 10 a.m. Monday, Feb. 11, also at Sunset.
In lieu of flowers, memorial contributions may be made to Shriner's Hospital for Children, Attn: Office of Development, 2900 N. Rocky Point Drive, Tampa, FL 33607. To leave fond memories and condolences, please visit www.sunsetmemorygarden.com.
Published on February 7, 2019
To plant a tree in memory of Bobby 'Robert' Jean Morris, please visit Tribute Store.

Plant a tree in memory
of Bobby

A place to share condolences and memories.
The guestbook expires on May 08, 2019.

Restore the guestbook to view the 5 more posts by family and friends, and share a memory or message of condolence of your own.